Over on the Lead adventure Forum more than a few members have been waxing nostalgic over the grimdark whimsy that was the original Warhammer 40,000 Rogue Trader game universe, indulging their wistful flights of past miniature gaming fancy by dusting off old and forgotten Rogue Trader figures and painting them up using current skill sets and techniques. The end results have been impressive to say the least, and so much so that I myself was not immune to the siren song of nostalgia for sci-fantasy wargames past.

Roughly 30 years ago I painted a great many figures for quite a few people including my old friend Paul Ryan. We were discussing some various and sundry topics last week and two of my gaming-related brain cells had a collision, and I asked Paul if he still had any of those figures I painted for him so long ago. As it turned out, he didn't have merely some of them, but damn near all of them including the many Rogue Trader era Space Marines, Inquisitors, and other fun things sci-fi and miniature.

I wasted no time and arranged to set up and execute a photo shoot, to chronicle my work of years past, so here now for your consideration and viewing pleasure are some of the many official and proxy Rogue Trader figures I rendered so long ago when my eyes were young and much keener, my hand much steadier, and my imagination running wild in the grimdark universe of a galaxy at war in the 41st millennium!

We begin with a number of Warzone figures and a wayward Grenadier Miniatures Traveller Vargr figure all adapted to serve as various WH40KRT proxies... 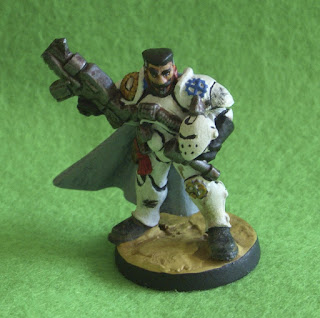 A Bauhaus hero adapted as a high ranking Imperial Army officer in carapace armor wielding a Bolter. Within the original Rogue Trader canon Imperial Army officers could and did have access to much better wargear that the hapless enlisted ranks of the vast hordes of lasgun-wielding cannon fodder of the Emperor of Humanity...

Next up is a Traveller Vargyr adventurer figure from Grenadier Models, repurposed as a faithful Beastman companion to a Rogue Trader: 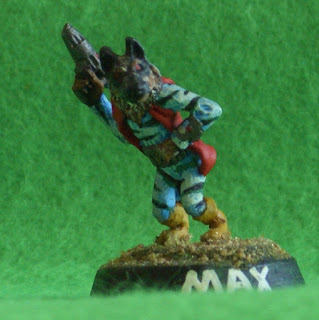 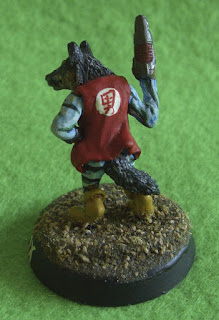 I replaced the original pistol with a WH40KRT plastic plasma pistol, and painted his vest as a surcoat bearing the sigil of his Rogue Trader master befitting his elevated status as the loyal inner circle minion/bodyguard of so powerful (and eccentric) an archetype of the Rogue Trader canon.

Next up are several more character figures from other manufacturers repurposed as various denizens of the Rogue Trader universe, starting with a junior Imperial Army officer with a bionic eye, Bolter, and Carapace Armor, an Urban War figure who also makes a more than passing Imperial Assassin with the right paint job: 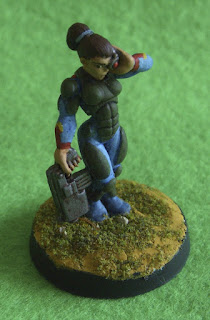 One of the Warzone heroes of the religious warrior order from that competitor wargame canon, here repurposed as a Rogue Trader wearing Carapace Armor and wielding a Bolter and a Power Axe: 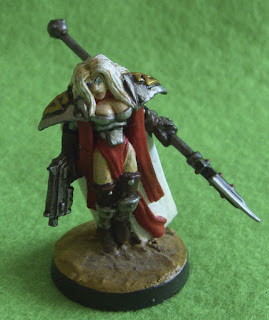 Here's a quartet of Urban War Syntha androids repurposed as generic robot soldiers of the Adeptus Mechanicus, but breveted out to an Imperial Army unit (hence the graffiti courtesy of the wits amongst the rank and file who fought alongside these mechanical servants of the Emperor): 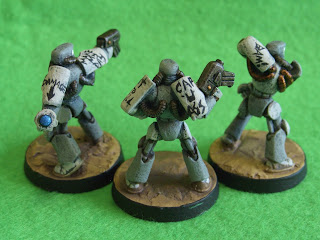 Next comes a heroine from the Firefight aka Ion Age line repurposed as an Inquisitor armed with a plasma gun and assorted built in weapon system in her custom-built powered armor suit: 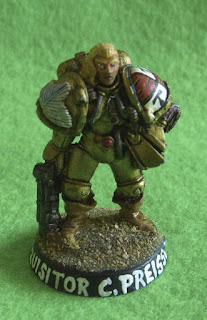 Second generation Space Marine Terminators and an Inquisitor in Terminator Armour sporting a bionic leg. The Inquisitor has been finished as an Inquisitor turned Rogue Trader character, while the Terminators are finished in a custom-to-order livery that nearly drove me barking mad to execute back when I was twenty-something, steady of hand and keen of eye: 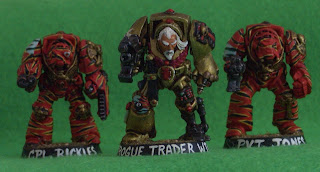 Finished in a connected theme was this Rogue Trader era seated Space Marine vehicle rider figure adapted to serve as a rank and file Space Marine suitable for the wargame table rather than just as an accessory to a finished Rhino APC: 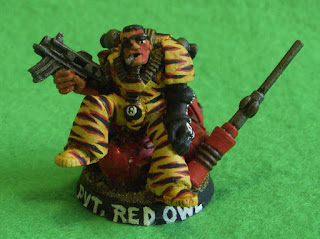 The knocked-out Khornate war robot the Marine is using for a barstool is a Grenadier robot from a boxed set that has been brought back into production along with its fellows by Mirliton of Italy.

Next comes a bit of Rogue Trader whimsy and a bit of figure ancient history, a Gretchin minefield clearance squad made up of old Citadel Miniatures fantasy goblins kitted out with assorted 1/35 scale cut down white metal muskets and flintlock pistols, and some 1/35 scale plastic WW2 German helmets: 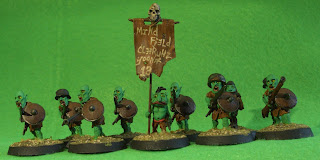 The banner is made from the lead foil that used to be used for sealing wine bottle tops, with some brass wire for the flagpole and crossbar, and a spare white metal skull from Dragontooth Miniatures (IIRC the skull's origins!).

Up next are Shamus and O'Malley, two Imperial Army Squat troopers full of blarney and ready to knock out the heavy armored enemies of the Emperor: 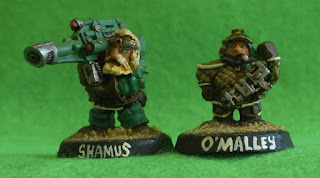 And to end this installment with a bang as it were, an original Rogue Trader Terminator Marine, finished as a member of the Legion of the Damned complete with a lengthy slogan that I freehand lettered back when I was young (and had more guts than brains!): 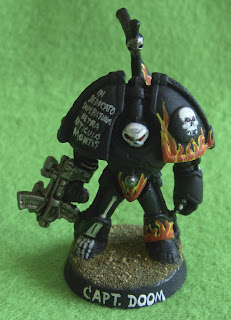 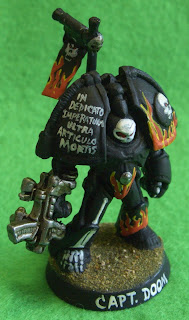 This ends the first installment of this photo chronicle. There were no less than five (5) Chessex figure boxes full of painted figures to sort out, and my camera battery gave out on me (#$%@@^!!!!). Even so, I took a great many photos, and the result is that the next installment of this humble blog will be all about the Metal Magic Space Lords figures I rendered for my old Friend Paul, so stay tuned until next time, because in addition to those five storage cases I mentioned, there were other boxes as well, and a castle that has to be seen to be appreciated!

Posted by BlackWidowPilot at 9:56 PM