I painted up a bunch of 1/72 scale Reviresco Mexican-American War figures -two complete war-game armies' worth in fact!- a number of years ago as a private commission for a friend of mine. Like all Reviresco figures, these are white metal alloy (lead-tin), and were originally sculpted in the old school method of lost wax. John McEwan is a fan of this fascinating period of American military history, and did extensive research on the uniforms, weapons, and equipment of the antagonists. His figures have quite a bit of detail that reflects his efforts, and despite their age once painted up these figures look quite effective on the wargame table.

Being 1/72 scale, they mix quite well with the 1/72 scale plastic figures from Imex covering the Mexican-American War, so between the two sources it's relatively easy to build up quite impressive armies to refight the battles of the period in miniature.

So I had finished up these two opposing armies for an old friend, and he took delivery of them, and I thought that was the last of the matter. A couple of years later when Sandra and I announced that we were pulling up stakes and moving to Texas, my friend gave me the complete set of two armies plus some extras he'd done to match as a going away present(!!!). The two armies have since languished in storage, never once seeing any use by me on the war-games table.

Here for your viewing pleasure are the two armies unit by unit, a total of 52 mounted figures, 83 foot, 6 guns, and a supply cart complete with powder barrels and dozing civilian driver...

The U.S. Army, Navy, and Marine Corps of the Mexican-American War: 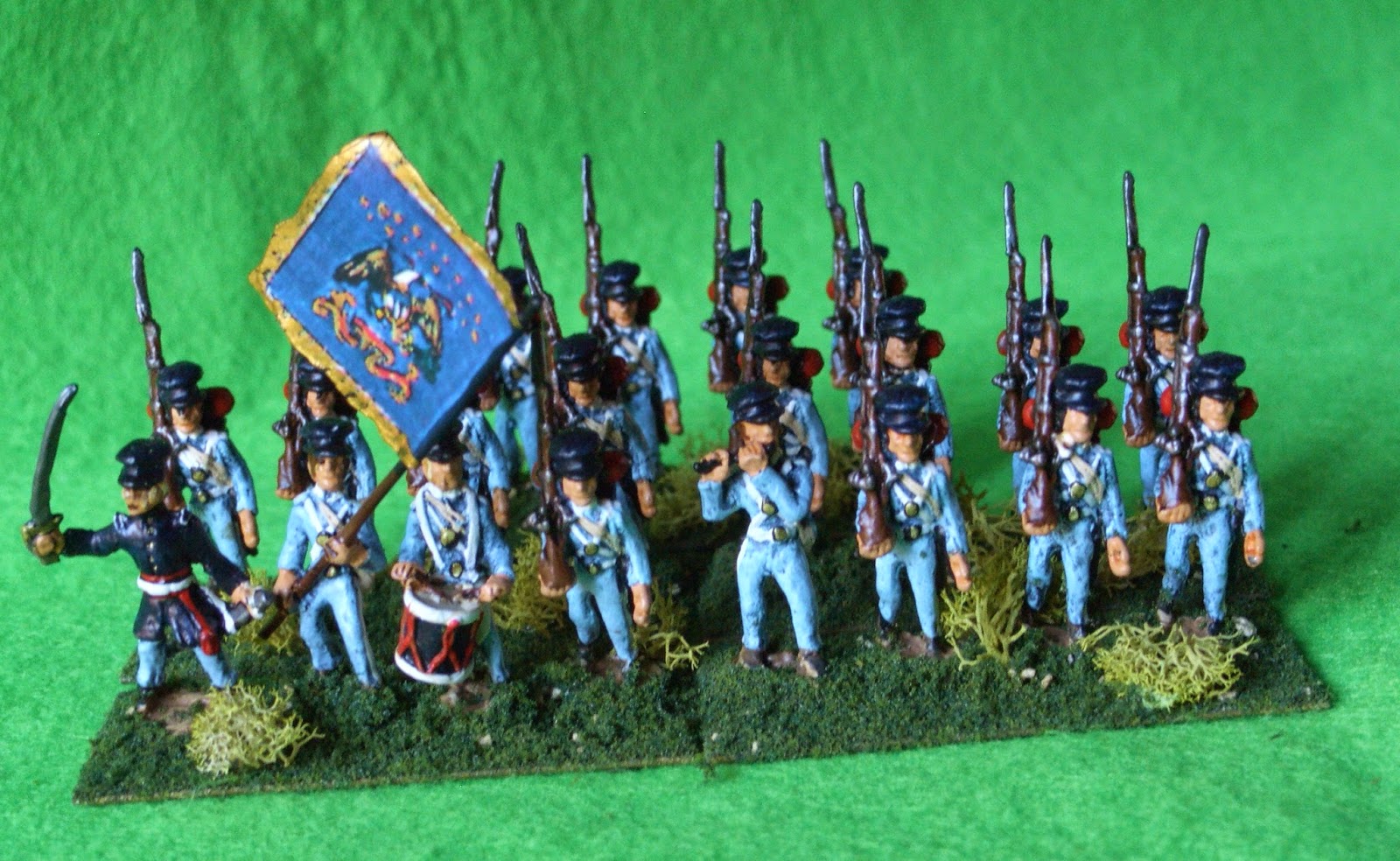 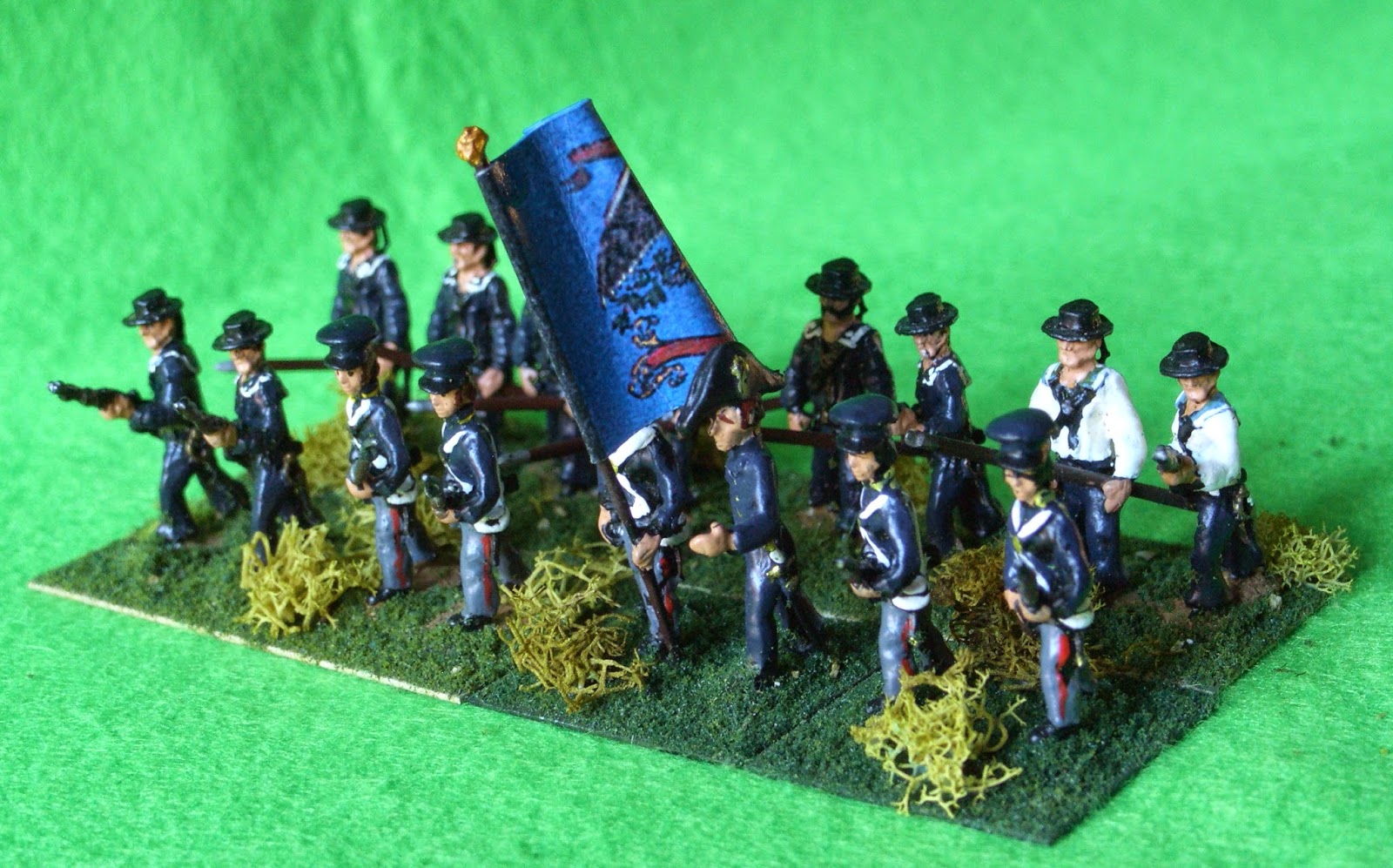 Mixed Regiment of U.S. Marines and sailors armed with
boarding pikes(!). These were painted by my friend
Dave Smith (and like John McEwan, Dave is a fan of
California history). 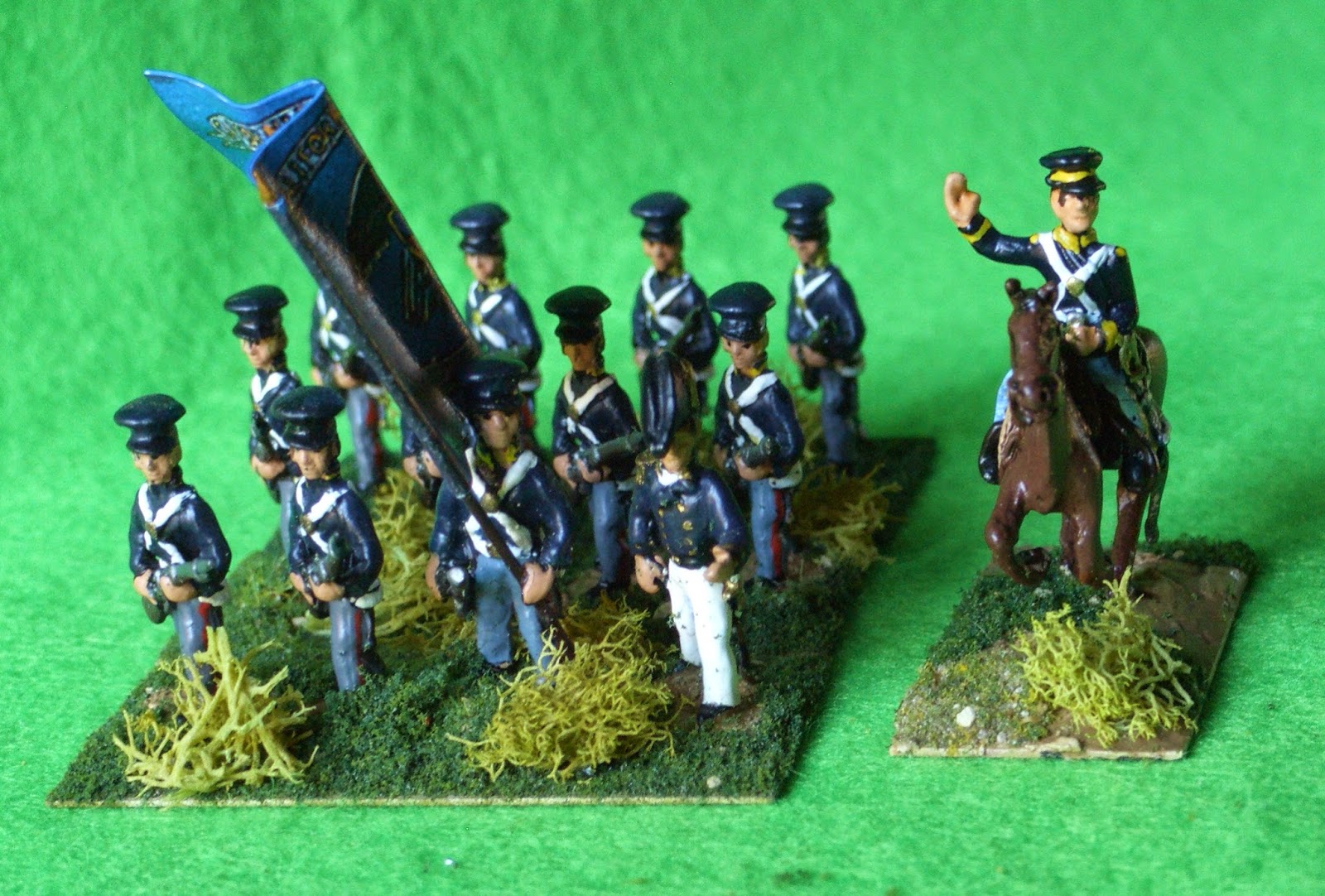 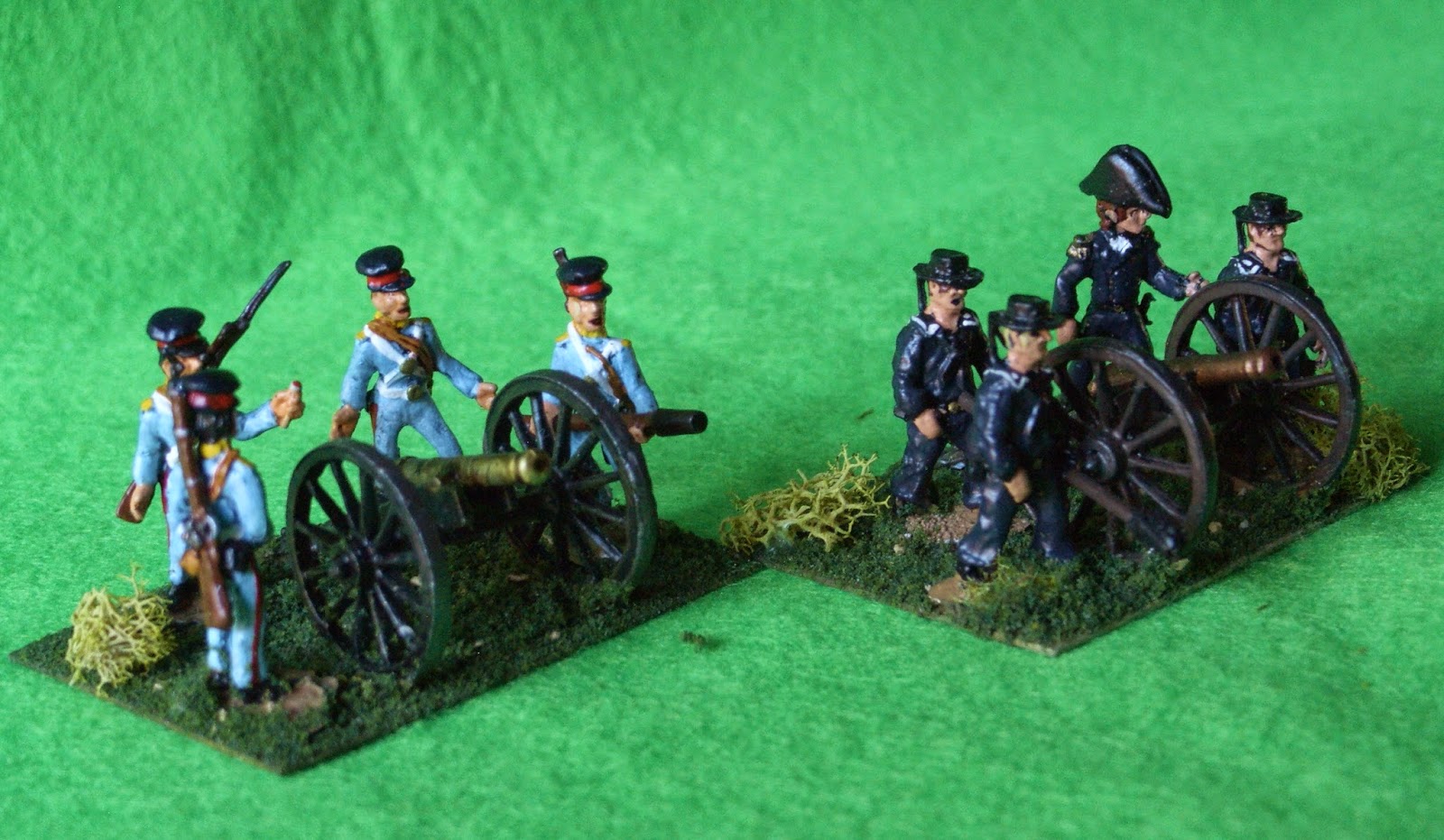 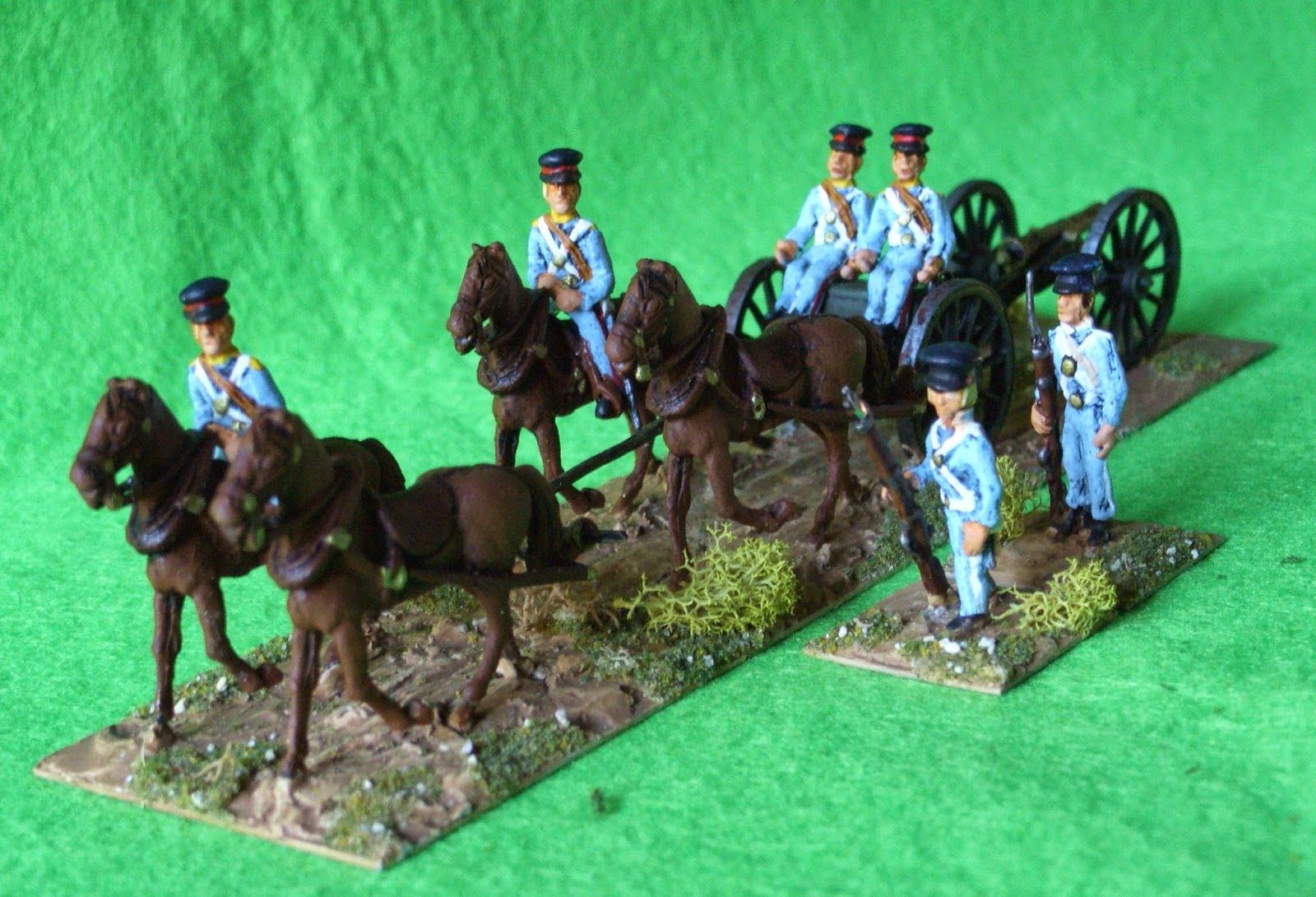 U.S. Army horse artillery limbered up and on the move 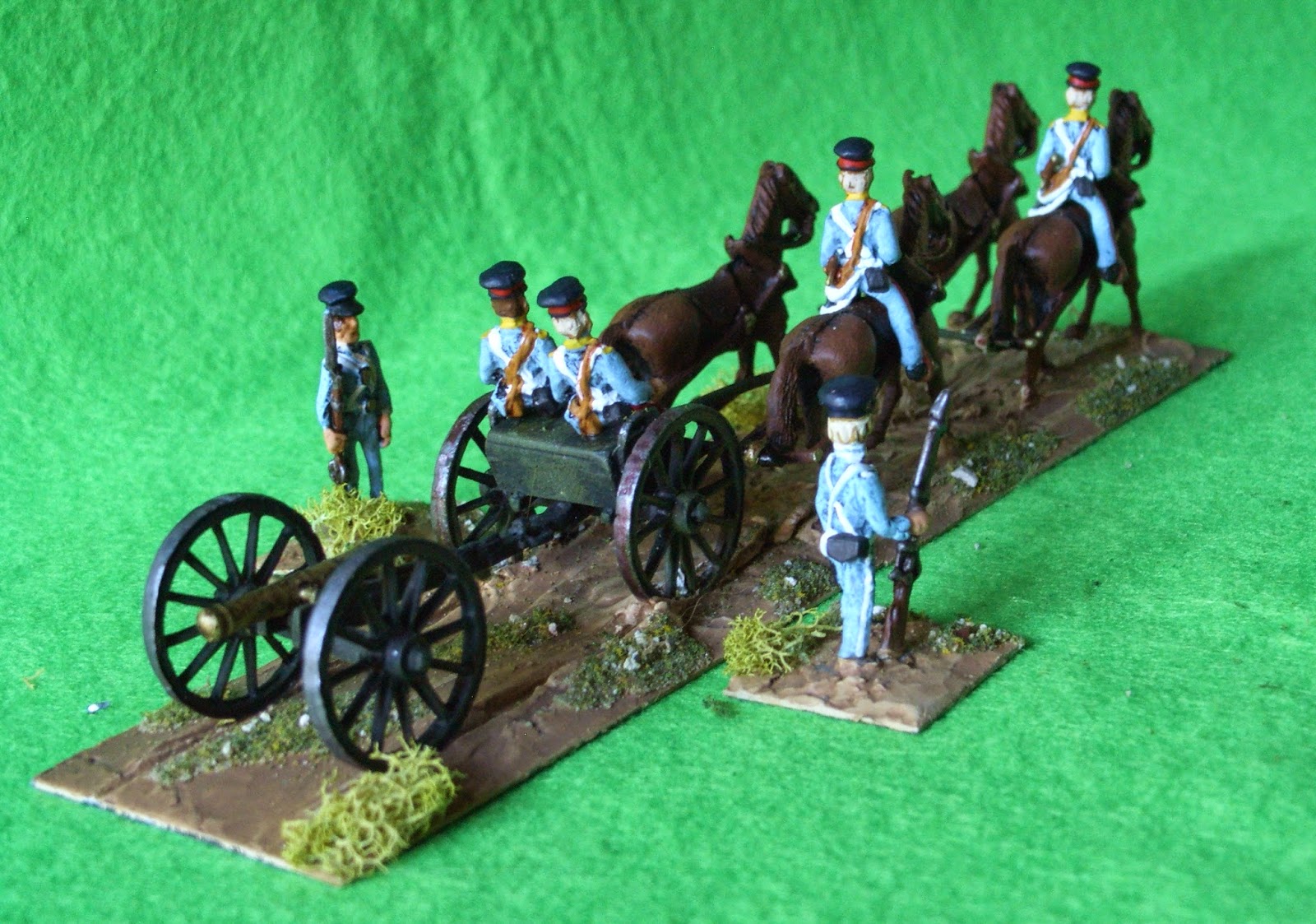 Rear view of horse artillery. The gun is separate and with the dismounted guard figures can be depicted on the war-game table as deployed for action. This gives the American army's player a third gun with more mobility than their Mexican Army opponent. 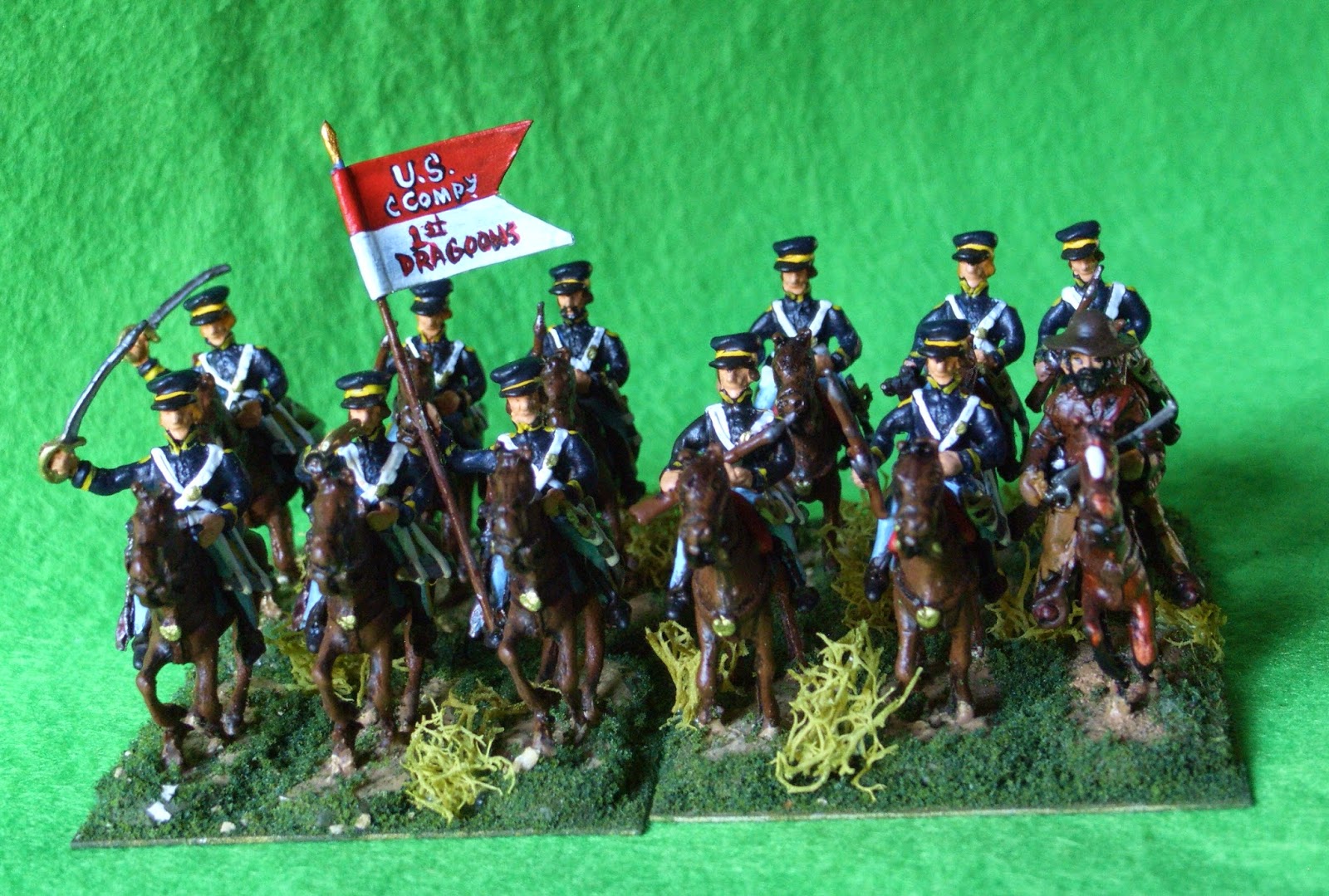 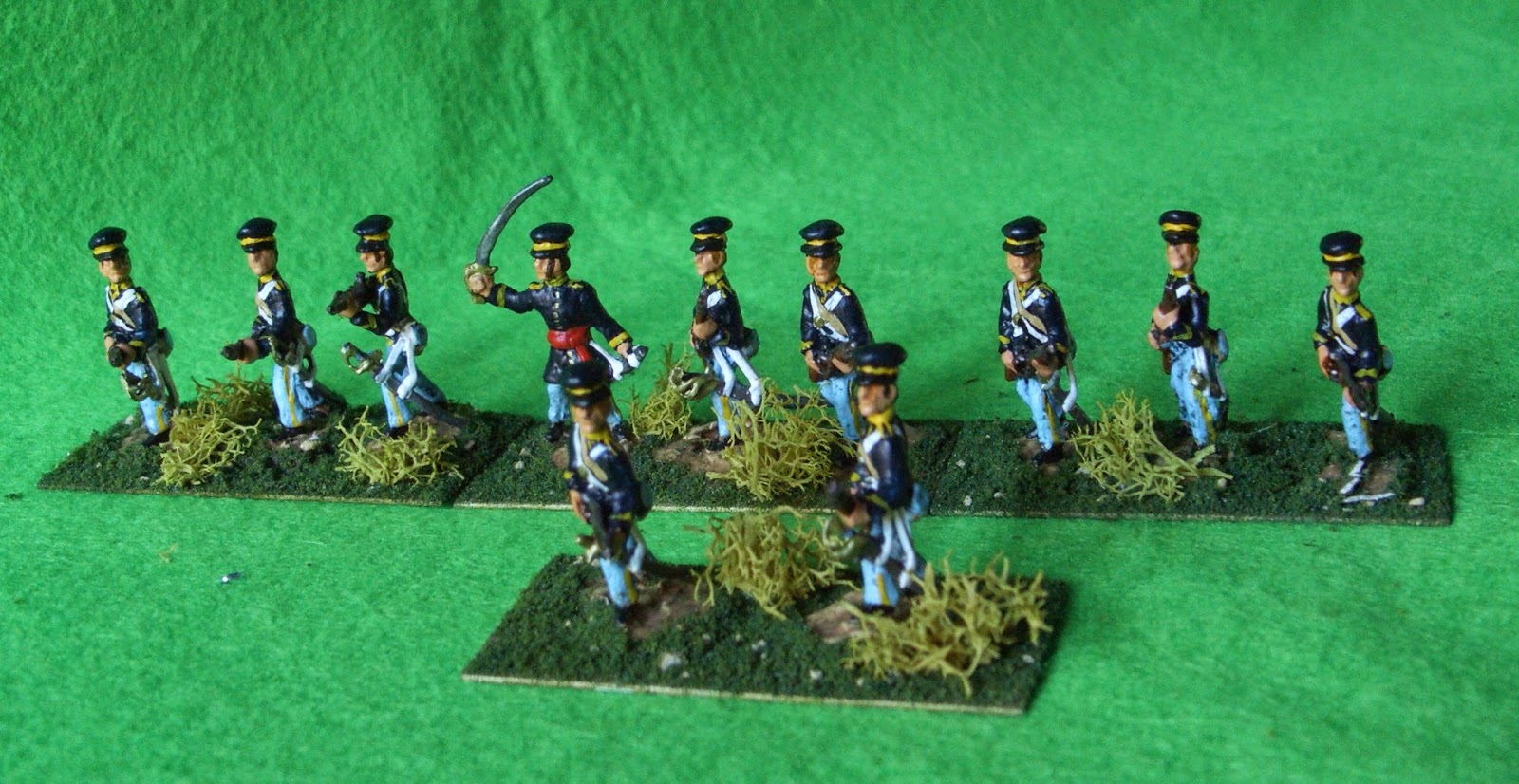 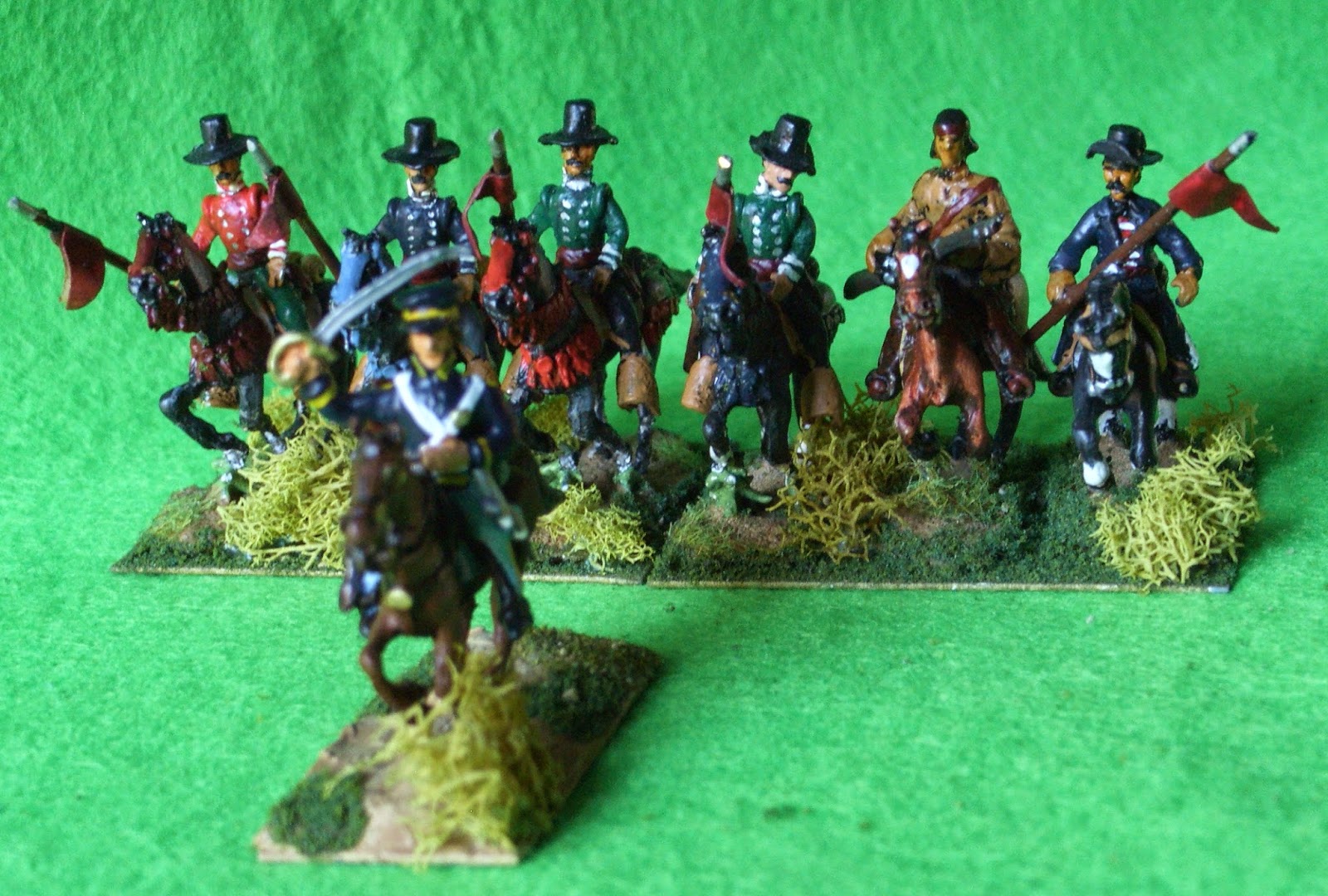 No, that American officer is not riding to get away from a bunch of Californio lancers intent on skewering him with their lances! This is in fact a unique U.S. Army intelligence gathering recon unit, the Mexican Spy Company. Deliberately wearing hats and uniform jackets that mimicked those worn by the Mexican lancer units and carrying lances with a red pennant, the Mexican Spy Company was able to scout deep into Mexican-controlled areas and deceive their opponents as to their true identity at a distance. The Native American scout was also a feature of the U.S. Army of the period, where such warriors were highly prized for their fieldcraft skills.

Dave handled the Spy Company, while I did the hell-for-leather mounted officer. 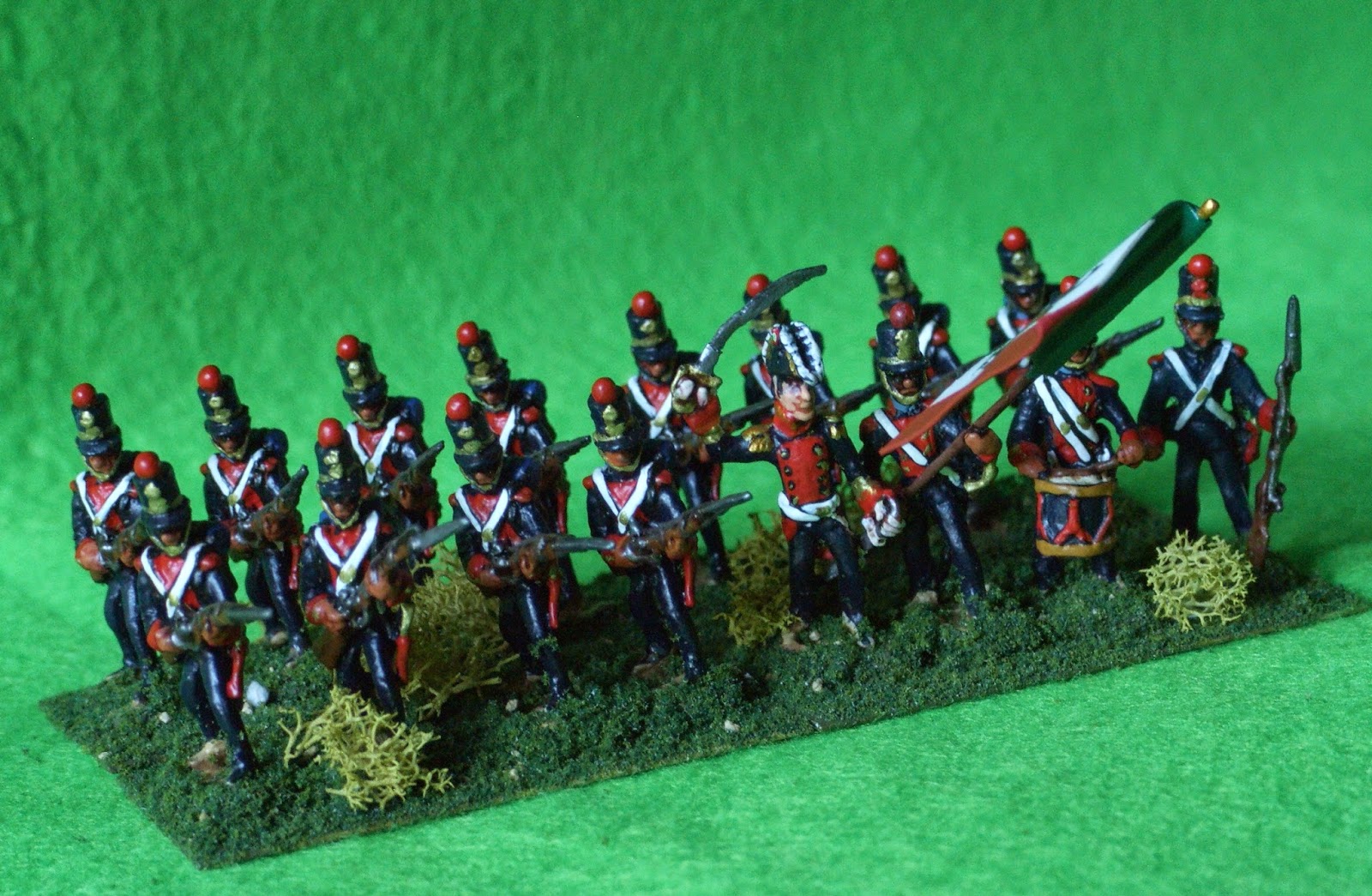 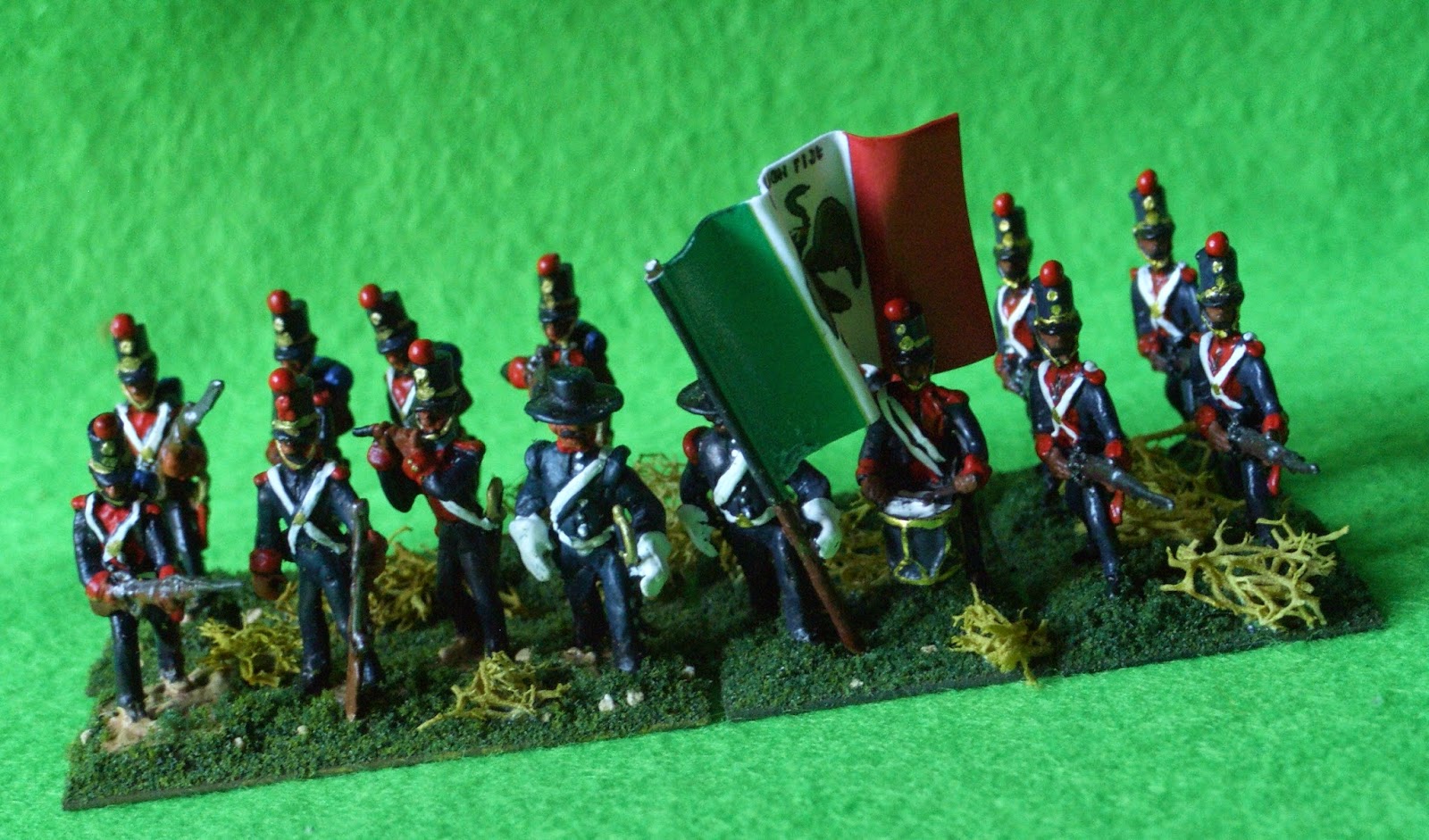 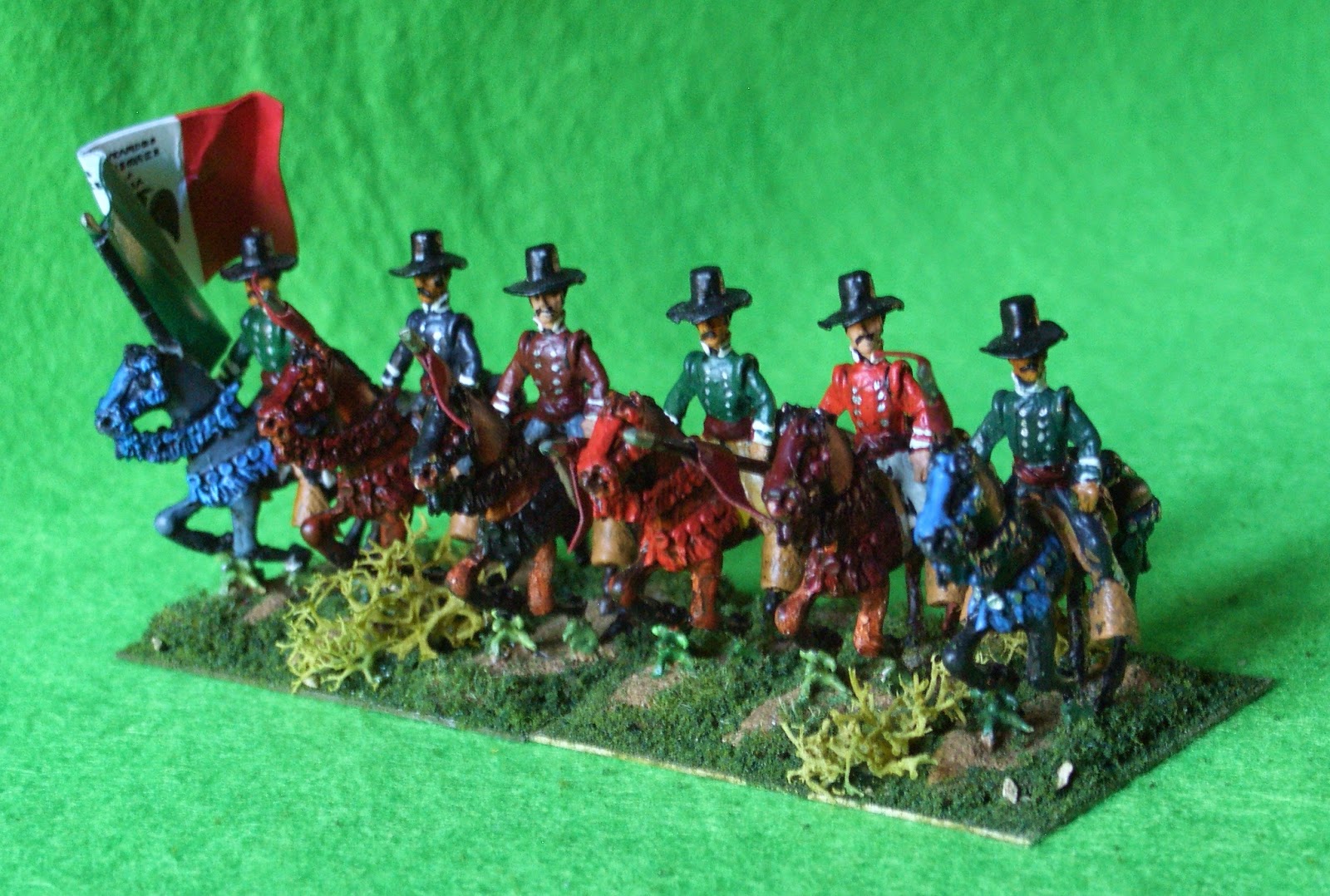 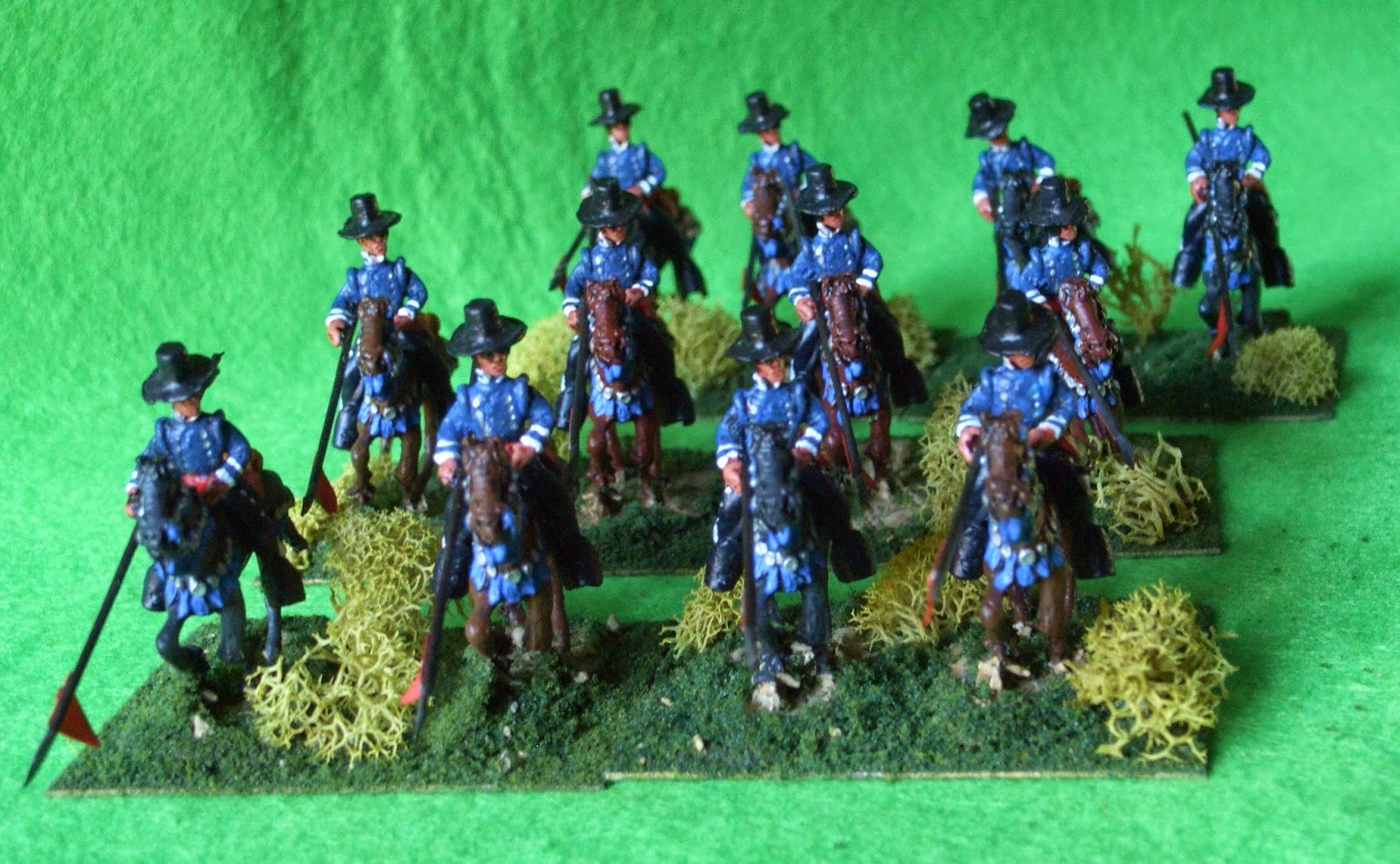 Presidial Lancers at the charge! 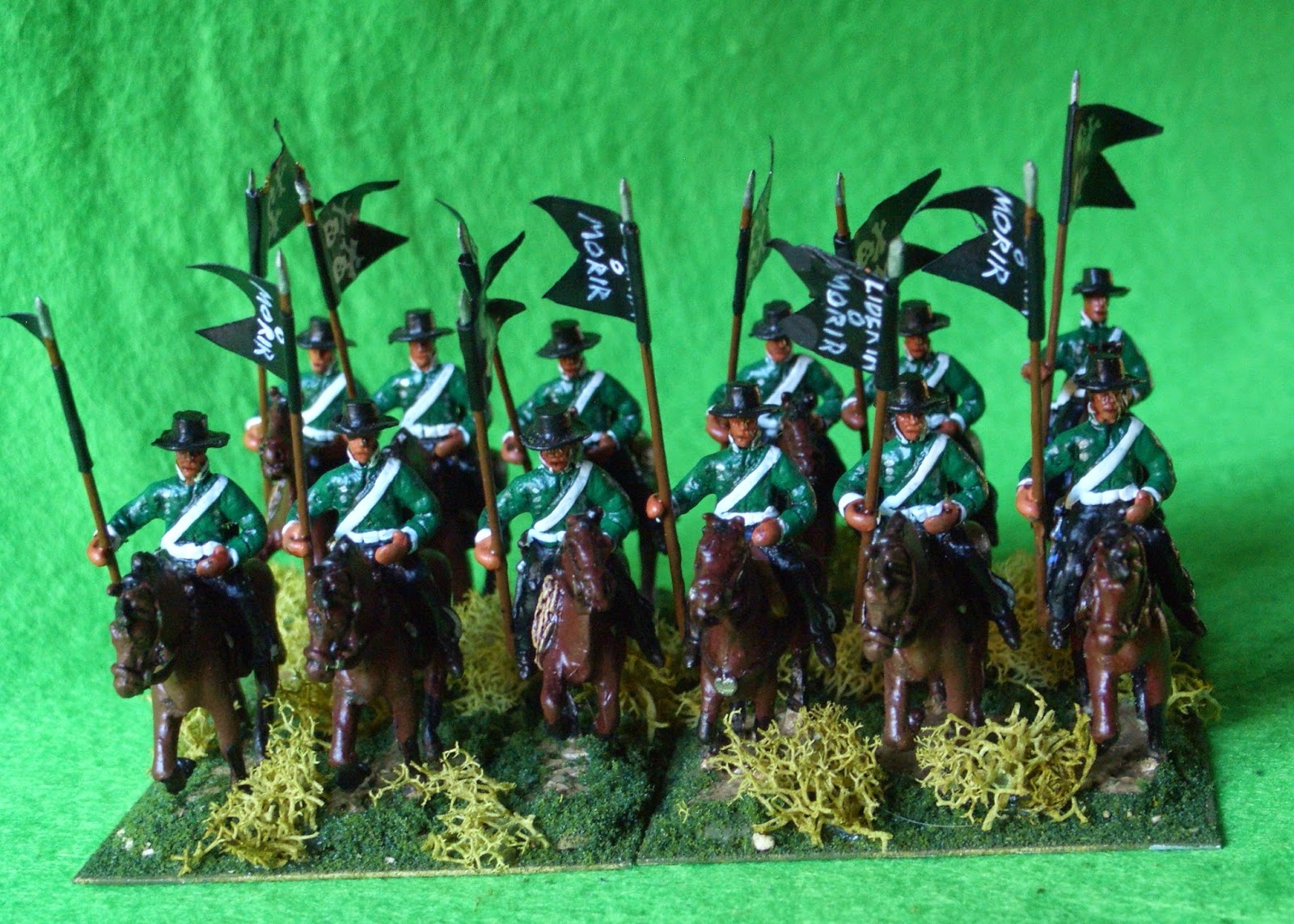 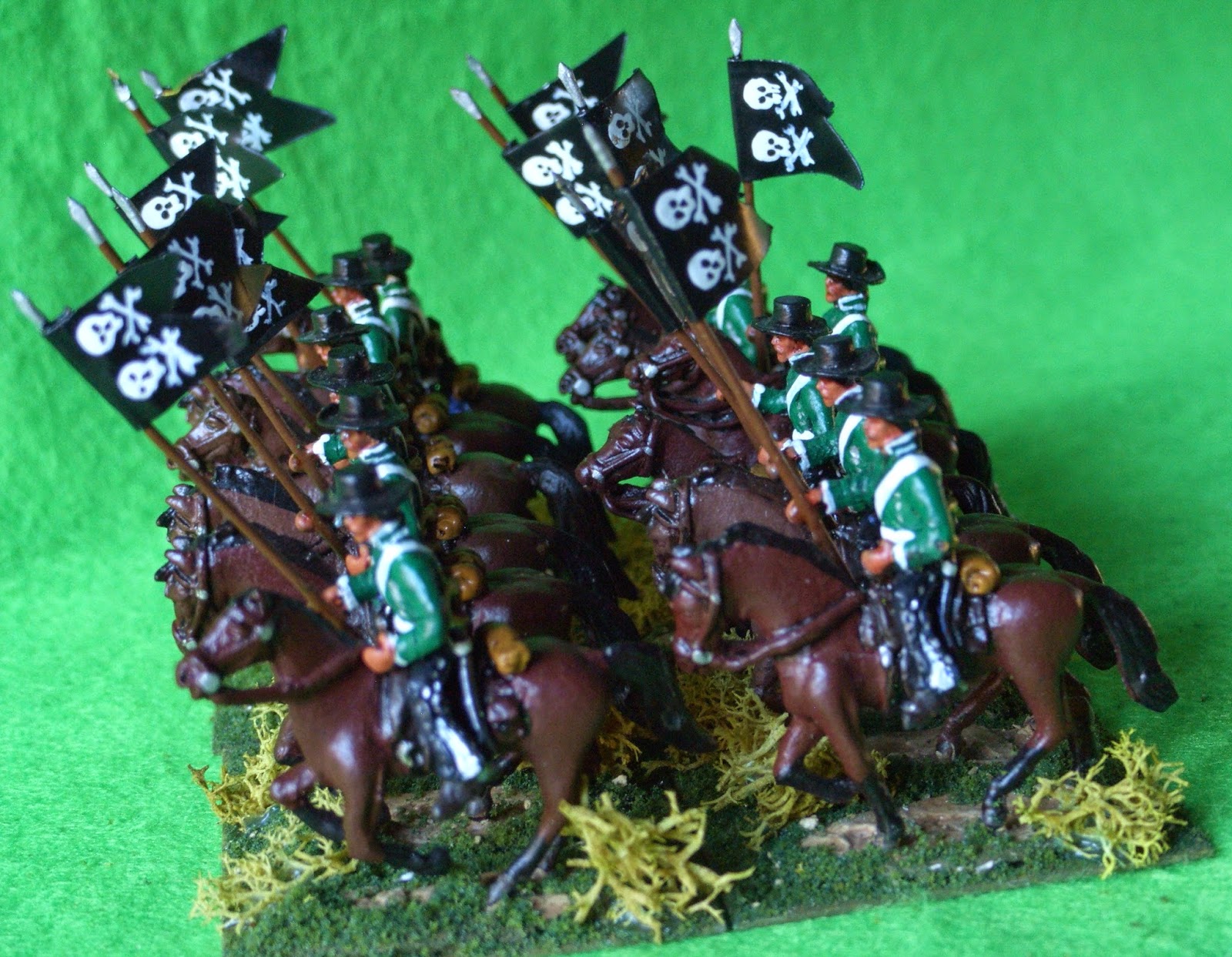 And they meant it! "Libertad o Morir!"

Note: As of this writing my dratted camera battery quit on me just before I could shoot photos of the Mexican Army's artillery and Californio militia infantry company (#$@%!!!). As soon as I am able I will add photos of these remaining units to this blog entry as an edit...

I have to thank mi amiga Rosana over at La Baguette, who so kindly helped me with the proper Mexicano Espanol rendering for the slogan on the lance pennants  as none of my reference sources I had at the time gave the original Spanish language rendering of "Liberty or Death!"

So. I can't keep from making new models and painting up more figures, and while I am fascinated enough by the period as a native Californian, I can't justify keeping around two armies I am never likely to use! So, this collection is looking for a new home!

I've posted the collection on my Etsy store site (RecycleAttitude) and priced the lot to move, and the sooner the better as I want to make room for more sci-fi projects (especially a whole bunch of new Yamato 2199 starship kits)!

So if you want to take the plunge into this fascinating period with two ready-to-use painted armies, here's your chance, as I really want them to find a good home where the two may do heroic battle across the green felt of a wargaming table as they were meant to do, rather than just sitting nestled in bubble wrap in a storage bin at the bottom of a pile of other bins marked "Sci-Fi terrain" and "Misc. Junk!"
Posted by BlackWidowPilot at 8:41 PM